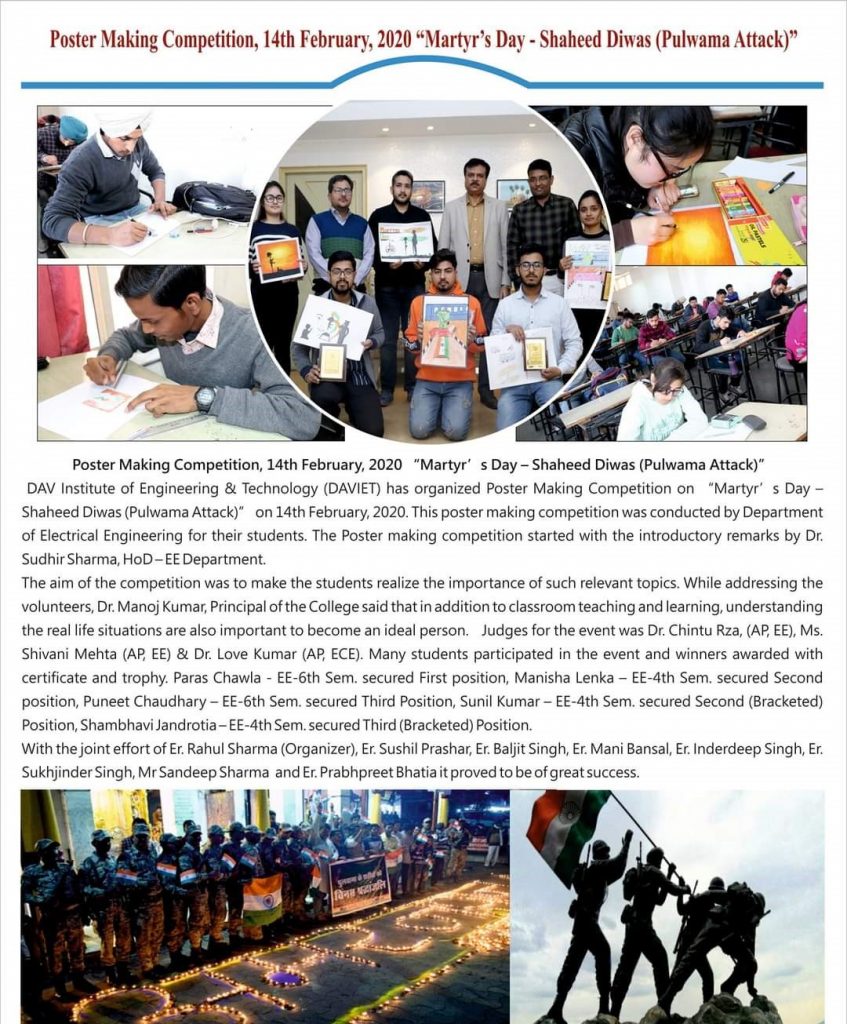 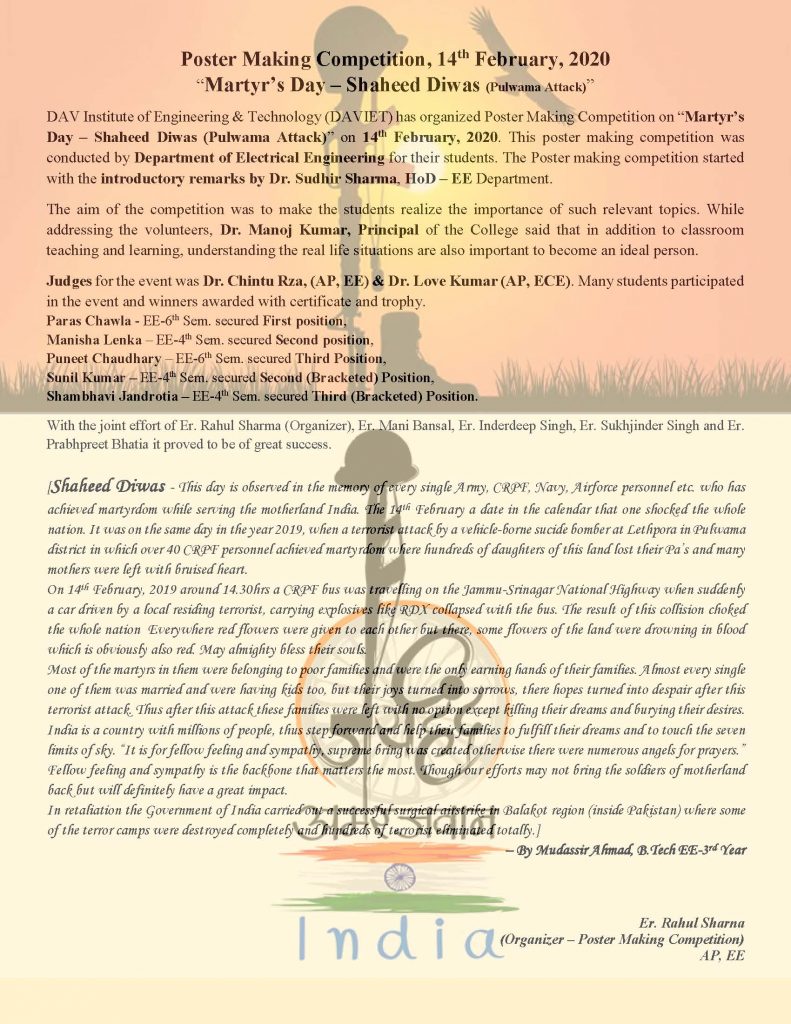 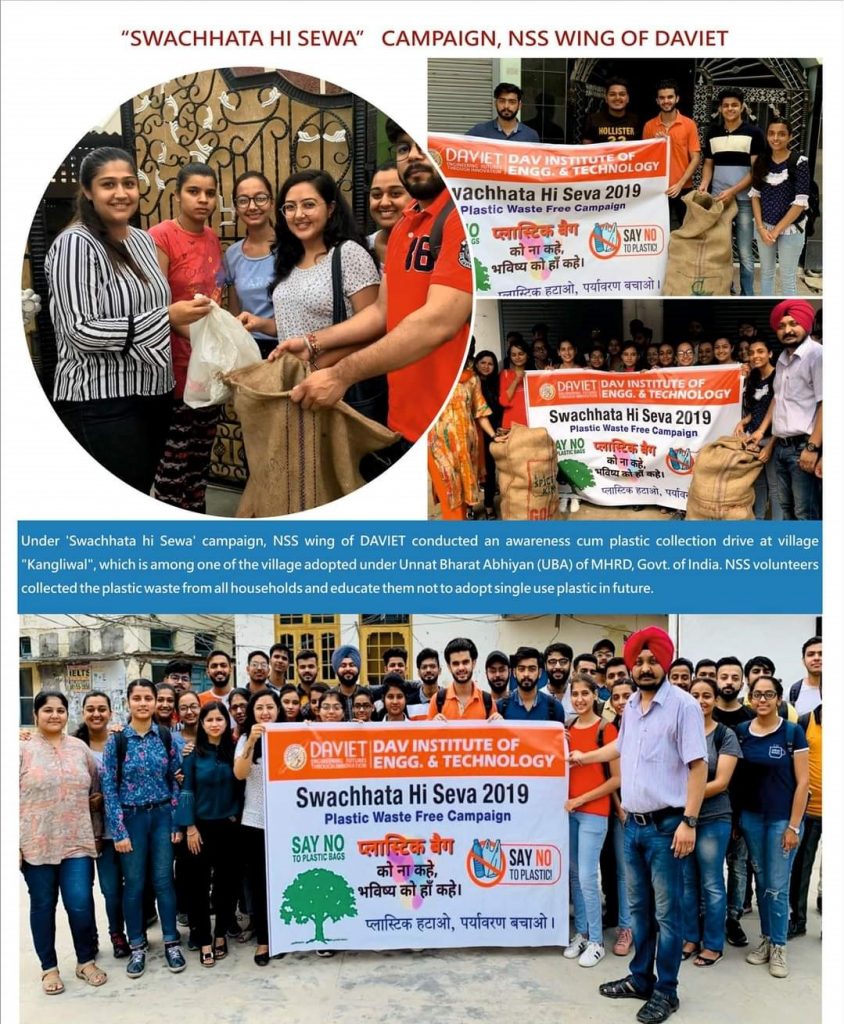 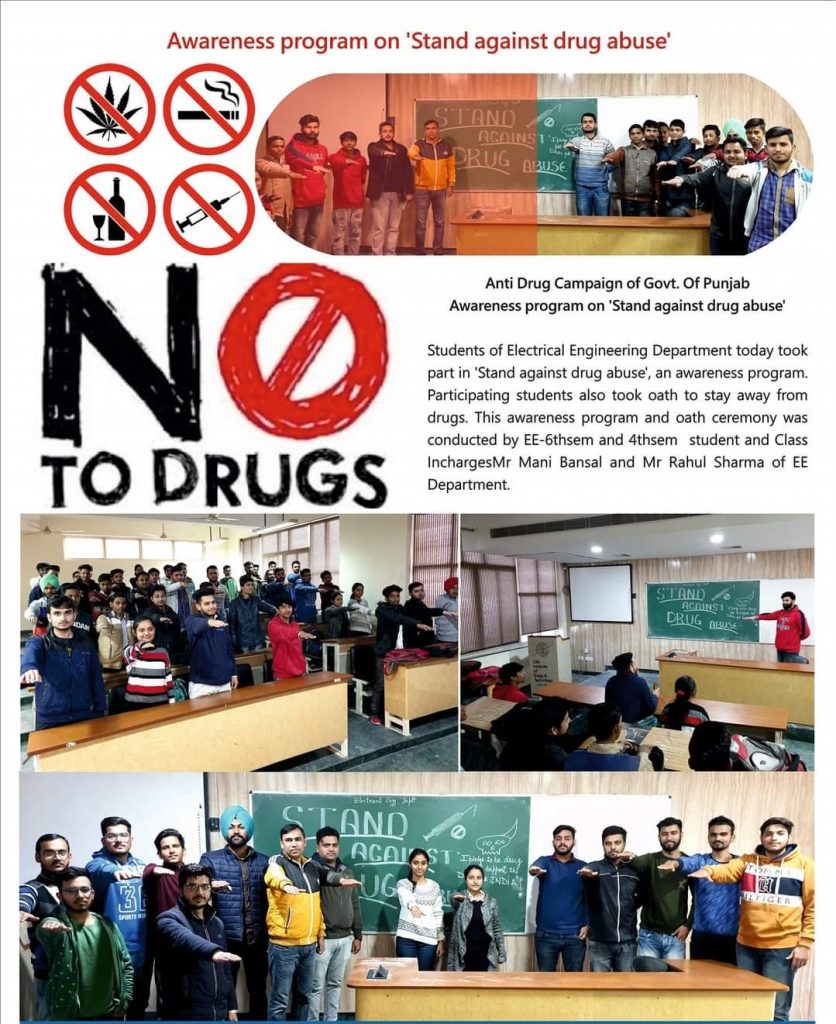 The event  was conducted under two broad categories viz. Solo and Group Singing. The  students of almost  all the departments of the institute had participated in both the categories. The participants were judged by the experienced personal namely, Ms. Jasdeep  Kaur (AP,MCA& Cultural officer), Mr. Baljit Singh (AP, EE), Ms. Sonali Talwar (AP,CSE), Mr. Gursewak Singh (AP, CSE).

The event was successfully organized by the students of Electrical Engg.5th sem.(3rd year) under the guidance of Mr. Rajesh Wadhwa (Assistant professor,ECE) with the blessings of Dr. Sudhir Sharma (HOD,EE).The faculty and staff of Electrical Engg. had given their best for the success of this event. SUPER SIX CRICKET is a team sport for two teams of six players each. A SUPERSIX TOURNAMENT of cricket is played in institute playground for two days between number of teams of various departments. It is played with the tennis ball for limited number of six overs.The cricket tournament is organized by Electrical Engineering Department on 4th and 5th of October, 2018. There is a good contest between various teams of the institute. Almost all teams played for almost six over’s in their individual innings andmanaged to score good scores, while the opposing team attempted to win the game by scoring more runs.

The order in which the teams played the tournament is as follows. Two groups (A & B) are formed. Group A consists teams of EE, CSE, ME, BBA, BCA department while group B consists teams of ECE, CE, M. Tech (EE, CSE & CE), MBA, MCA in which students of different semesters played the matches within their individual groups. The 14 matches are played between the 28 teams on first day. On the second day 11 matches were played between 22 teams.

Finally two teams qualified for the finals are EE final year and ECE 3rd year. Batting first EE team managed to score 41 runs in six overs on board which is scored by ECE team in 4.5 overs and win the contest. 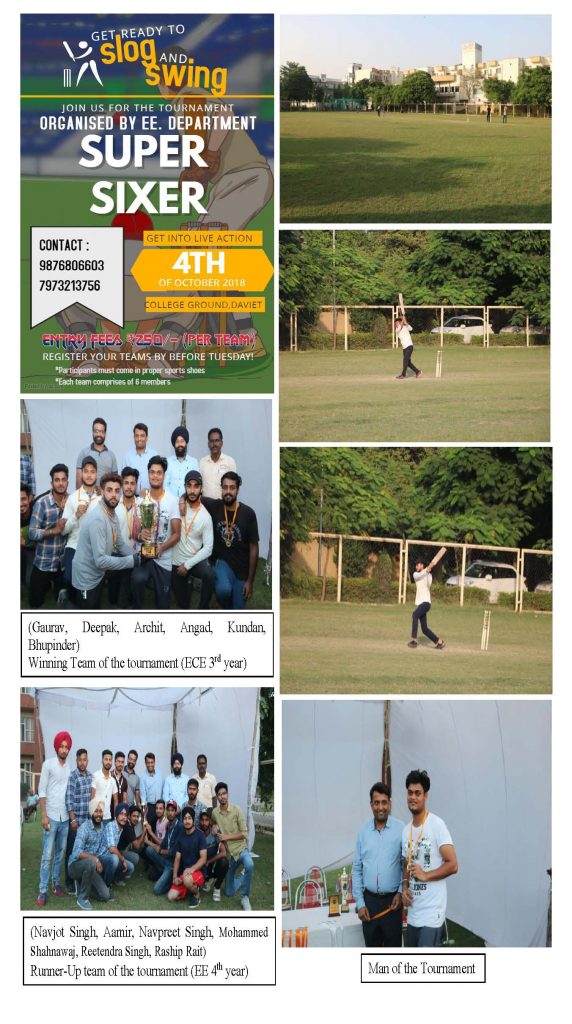 Role-play is a technique that allows students to explore realistic situations by interacting with other people in a managed way in order to develop experience and trial different strategies in a supported environment. It is a very flexible teaching approach because it requires no special tools, technology or environments. The students of 7th semester, Electrical Engineering organized role playson 27th September, 2018 for B.Tech. Electrical Engineering 5th and 7th semester students in a seminal hall. Dr.Sudhir Sharma (HoD – EE), Dr.ChintuRza (AP), Mr. Baljit Singh (AP), Mr. Mani Bansal (AP), Mr, Rahul Sharma (AP), Mr. Inderdeep Singh (AP) were present at the  event. Topics for role play were i) System protection and ii) Working of alternator.The basic idea of “System protection” was to show how different types of protective schemes like relays, fuse, circuit breaker etc. are used for protection and also the role of an electrical engineer in clearing the fault. Similarly the basic idea of “Working of alternator” was to show how different parts of alternator like stator, rotor, exciter, prime mover etc., worked together to generate output and also to show the precautionary measures when there is fault in transformer. At the end, Dr.Sudhir Sharma (Head – EE) encouraged all the participants with his kind words. He appreciated the efforts done by the department of Electrical Engineering and motivated the students to The Department of Electrical Engineering is organizing a virtual quiz competition under the club ‘TECH ELECTRA’ on 09.02.2018 for the students of B. Tech (1st, 2nd and 3rd year) in the Institute. The prelims for the same will be conducted in R-21 of the Institute.

In collaboration with Department of Electronics and Communication Engineering, the department has formed a club named C3E. The club organizes different events for the student that helps them to increase their aptitude level along with the Technical Knowledge.

The various events organized by students are:

The student club named Tech Electra has been formed with mission to enhance the communication skills & developing leadership capabilities. The various events organized by students are:

The sports club of the department has organized many sports activities in collaboration with other departments. Various inter-departmental tournaments have been organized to encourage the students towards their physical fitness, strong mental abilities, leadership qualities and sportsmanship.

The various tournaments organized are: The various Technical & Non-Technical Events organized by department are:

Haux Placement Cell came into existence with an endeavor to inform the students of DAVIET, Jalandhar about the placement drives carried out by various companies. The placement drive contains three rounds. The aptitude test G. D’s and personal interview. The cell aims to fine tune the skills of the students so as to prepare them for the future. In its first event itself 700 students offered for the test. Out of these 100 students cracked the exam successfully. These students appeared for the group discussion and finally 10 students were declared winners. Winners were awarded pen drives as prizes.