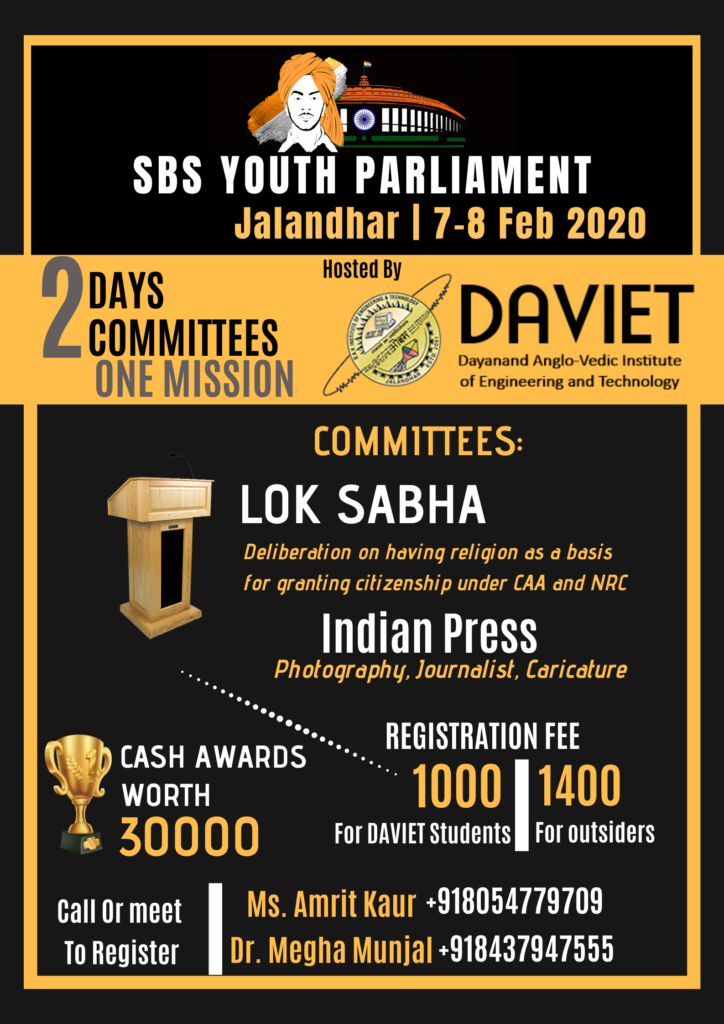 Arise! Awake ! and stop not until the goal is reached.

DAV Institute of Engineering and Technology is hosting youth Parliament on 7th and 8th February 2020. It is a platform offered to the youngsters where they are given a mock parliament set up so that they can gain exposure to the parliamentary type debate. The faculty coordinators for the event are Dr Megha Munjal Sharma and Ms Amrit Kaur from the Department of Business Management.

The initiator of Change Youth Organization is one of the most established youth development nonprofit organization working in Punjab and Delhi since 2015. Its aim is to impart leadership amongst youngsters and make them socially and politically aware. For the services, the Organization has been honoured with the National Youth Award 2018 by the Government of India.

Initiators of Change is organizing SBS Youth Parliament to at DAV Institute of Engineering and Technology on 7th and 8th February 2020 which will have around 200 youngsters participating from various parts of Punjab. The conference will stimulate two committees of Indian base in which students will play the part of various political leaders and deliberate upon to issues. During the course of the conference, students will get to learn about negotiation, communication skills, decision making, writing skills and knowledge about Indian political system. The agenda for Youth Parliament is “Religion as a basis for granting citizenship under CAA and NRC” deliberate upon issues to come out with a solution.Further, the students can also represent Indian Press members as Photographers, Journalists or Caricaturists.