This Department has established well equipped and modern Physics, Chemistry & Language labs to upgrade basic technological skills of the first year students. The fundamental laboratories in the department are:

Further, facilities are available for measuring optical fibre parameters like numerical aperture, attenuation etc. In the lab we also offer holographic studies. The basic focus in the Engineering Physics Laboratory is to develop scientific temper and encourage students to innovate in diverse technical areas for better understanding of technical and engineering problems. We believe that after conducting experiments under the able guidance of the faculty members, the students will have a sound theoretical and practical knowledge and they will be able to demonstrate the ability to identify, formulate and solve real-world technical problems. 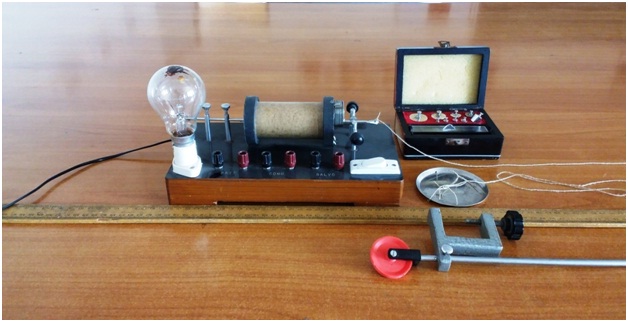 This apparatus is used to find the frequency of AC mains. This can also verify the law of vibrations of stretched strings. 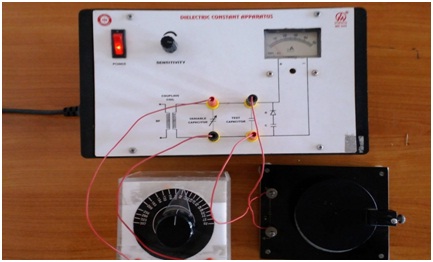 By using this apparatus, one can measure the dielectric constant and polarizability of  a given dielectric slab.

This apparatus is based on tangent law of magnetism, this apparatus is used to plot the variation of the magnetic field of the current carrying circular coil on the axis. It can also be used to verify  Biot Sawart’s  law. 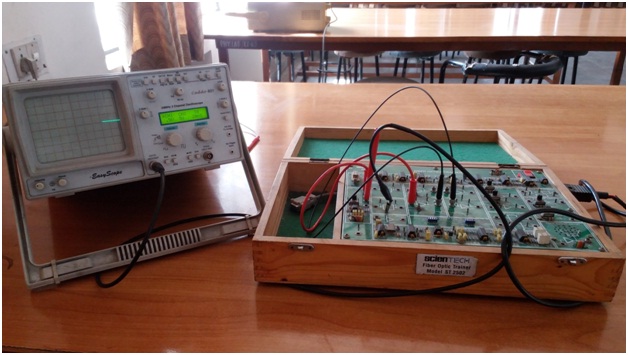 Using the optical fiber kit, one can measure NA and attenuation coefficient of the fiber. Bending loss can also be measured with the help of this kit.

The Engineering Chemistry Laboratory has been designed to acquaint the students with practical knowledge of the basic phenomenon/concepts of chemistry that they face during course of their study in the industry and engineering field. The students will be able to understand and explain scientifically the various chemistry related problems in the industry/engineering and develop experimental skills for building technical competence. Also, students will be able to enhance the thinking capabilities in the modern trends in Engineering & Technology, learn and apply basic techniques used in chemistry laboratory for preparation, purification and identification. They learn to employ the basic techniques used in chemistry laboratory for analyses such as chromatography, spectroscopy, volumetric titrations, conductometry and stalagnometric method.The laboratory is equipped with Spectrometers, Conductivity meters, Colorimeters, pH meters, BOD Incubator, Flame photometers etc. to familiarise students with a variety of methods used to study matter from the molecular perspective. Various experiments cover the analysis of water (acidity, residual chlorine, hardness, BOD, COD measurements); spectroscopic studies of molecules; synthesis of organic polymers and chromatographic studies etc. In addition, further equipments and chemicals are available for the analysis of polluted water samples. The basic aim of the experiments conducted in the Laboratory is to train the students as both scientists and engineers in order to enhance their problem solving abilities and mould them into successful professionals and responsible citizens. 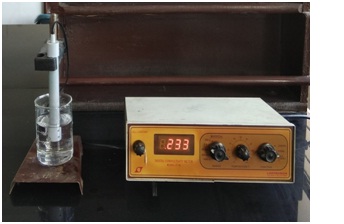 It is a convenient instrument for measurement of conductivity of various electrolytes such as caustic content of rinse water, Electrolytic impurities of Distilled/Demineralised water, Sulphuric acid, concentration in pickling baths, Anodizing tanks, Soil conductivity and other applications. 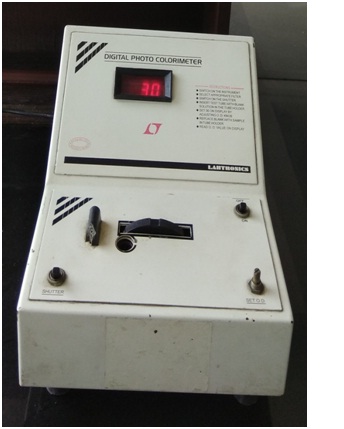 A colorimeter is a device used in colorimetry. In scientific fields the word generally refers to the device that measures the absorbance of particular wavelengths of light by a specific solution. This device is commonly used to determine the concentration of a known solute in a given solution by the application of the Beer-Lambert law, which states that the concentration of a solute is proportional to the absorbance. Digital colorimeters are widely used across different work areas including, environmental testing, clinical diagnostics, pharmaceutical analysis, and biochemistry. Besides being used for basic research in chemistry laboratories, colorimeters have many practical applications such as testing water quality by screening chemicals such as chlorine, fluoride, cyanide, dissolved oxygen, iron, molybdenum, zinc and hydrazine. They are also used to determine the concentrations of plant nutrients such as ammonia, nitrate and phosphorus in soil or hemoglobin in blood. 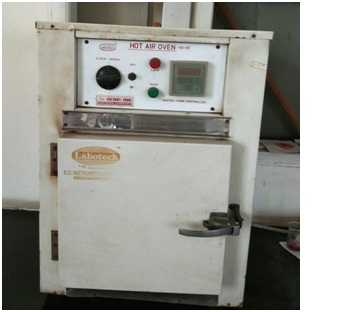 The electrical device which is widely used in medical products manufacturing industries, rubber industries, and many more to perform the process of sterilization using dry heat is known as Hot Air Oven. The instrument works on the basis of dry heat to sterilize the specimens and articles. The instrument can be operated at a temperature of 50° Celsius to 250° Celsius or 122° Fahrenheit to 482° Fahrenheit. The instruments are also known as the thermostat that controls the temperature. The device is provided with the digital panel to control the temperature digitally.

The device is equipped with the double-walled glass wool insulation that helps to conserve the energy to maintain the level of heat inside the cabinet as the inner layer of the cabinet is the less conductivity of heat energy whereas the outer layer is of metal. The instrument is widely used in pharmaceutical industries to sterilize the medical tools and instrument. It is a double walled chamber made up of stainless steel inside. The instrument works on the principle of fine gravity air convection in a highly heated electrical chamber of the unit. The instrument comprises of a double walled design and PID temp. Controller & automatically control units that helps to maintain the homogeneous temperature in the cabinet, return back to the preset temperature easily after opening the door of the hot air oven machine. It is a highly economical operation that offers simple operation of heating and drying of the common material. The instrument does not produce any kind of noises. 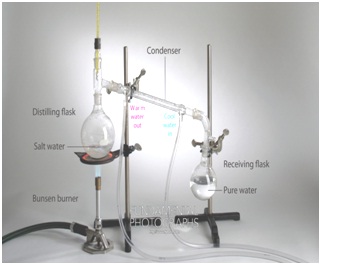 Water distillers are neither intended to treat water that is visually contaminated nor intended to convert waste water to safe, microbiologically. A water distiller works by boiling water into water vapour, condensing it and then returning it to its liquid state. It is collected in a storage container.

DAVIET has set up Research Centre in January 2008 to promote research in interdisciplinary area of Nanotechnology. It is the first engineering institute in north India to establish a well furnished nanotechnology laboratory. Universal Scanning Probe Microscope (Model NT-MDT Solver PRO M4) was imported from Russia and installed in August 2008. Hind High Vacuum Thin Film coating unit was also installed in the same year.

Achievements: Nano wires of copper (200nm) have been fabricated using electrochemical Cell and Templates synthesis techniques. Hetro-structure of Cu-Se and CdS Nano wires have been grown in the range of 10-200nm. Using chemical synthesis route we have prepared Nano particles and Nano rods Nano Needles of Barium Carbonate, Iron Oxolate, Ba Hexa-ferrites ,Zinc Oxide, Cadmium Oxide and Cadmium Sulphide .Nano particles of Zinc Oxide have been fabricated following Quenching Method with variation in time and temperature. The same composition has been prepared by Hydro Thermal Method also. SEM, TEM, XRD, UV- vis and FTIR characterization have been done for all these samples and reported in International journals of repute. The results of our investigation would certainly be helpful in the fields of Nano electronics, Opto electronics and Material science 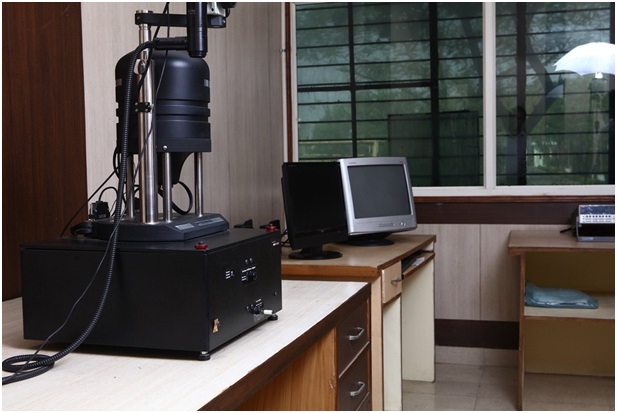 Atomic-force microscopy (AFM) or scanning-force microscopy (SFM) is a type of scanning probe microscopy (SPM), with demonstrated resolution on the order of fractions of a nanometer, more than 1000 times better than the optical diffraction limit. The information is gathered by “feeling” or “touching” the surface with a mechanical probe. Piezoelectric elements that facilitate tiny but accurate and precise movements on (electronic) command enable very precise scanning. The AFM has three major abilities: force measurement, imaging, and manipulation.

In force measurement, AFMs can be used to measure the forces between the probe and the sample as a function of their mutual separation. This can be applied to perform force spectroscopy.

For imaging, the reaction of the probe to the forces that the sample imposes on it can be used to form an image of the three-dimensional shape (topography) of a sample surface at a high resolution. This is achieved by raster scanning the position of the sample with respect to the tip and recording the height of the probe that corresponds to a constant probe-sample interaction (see section topographic imaging in AFM for more details). The surface topography is commonly displayed as a pseudo-colour plot.

In manipulation, the forces between tip and sample can also be used to change the properties of the sample in a controlled way. Examples of this include atomic manipulation, scanning probe lithography and local stimulation of cells.

Simultaneous with the acquisition of topographical images, other properties of the sample can be measured locally and displayed as an image, often with similarly high resolution. Examples of such properties are mechanical properties like stiffness or adhesion strength and electrical properties such as conductivity or surface potential. In fact, the majority of SPM techniques are extensions of AFM that use this modality.

The AFM has been applied to problems in a wide range of disciplines of the natural sciences, including solid-state physics, semiconductor science and technology, molecular engineering, polymer chemistry and physics, surface chemistry, molecular biology, cell biology and medicine.

Applications in the field of solid state physics include (a) the identification of atoms at a surface, (b) the evaluation of interactions between a specific atom and its neighbouring atoms, and (c) the study of changes in physical properties arising from changes in an atomic arrangement through atomic manipulation.

In cellular biology, AFM can be used to (a) attempt to distinguish cancer cells and normal cells based on a hardness of cells, and (b) to evaluate interactions between a specific cell and its neighbouring cells in a competitive culture system. 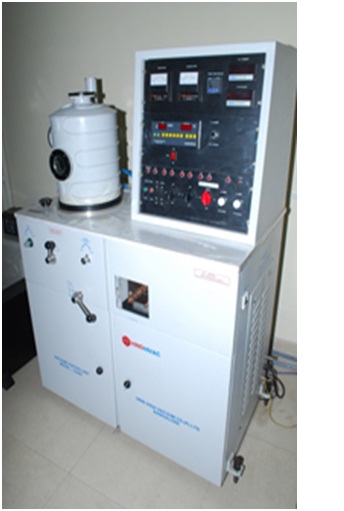 Vacuum coating and metalizing is the process of adding a thin film of aluminium or other coating to a material.

In principle, the process calls for the evaporation of the coating material inside a vacuum chamber, after which it condenses onto a web of substrate as it passes through. 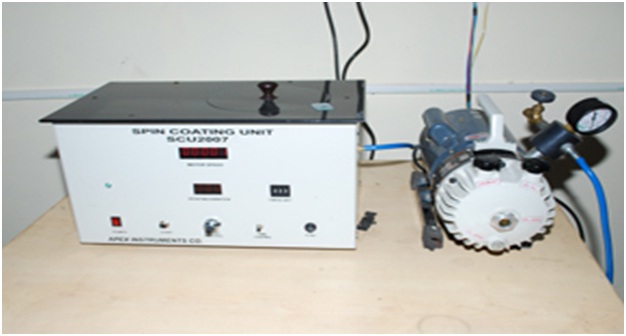 Spin coating is a procedure used to deposit uniform thin films to flat substrates. Usually a small amount ofcoating material is applied on the center of the substrate, which is either spinning at low speed or not spinning at all. The substrate is then rotated at high speed in order to spread the coating material by centrifugal force. A machine used for spin coating is called a spin coater, or simply spinner.

Rotation is continued while the fluid spins off the edges of the substrate, until the desired thickness of the film is achieved. The applied solvent is usually volatile, and simultaneously evaporates. So, the higher the angular speed of spinning, the thinner the film. The thickness of the film also depends on the viscosity and concentration of the solution and the solvent

Spin coating is used for many applications where relatively flat substrates or objects are coated with thin layers of material. The material to be made into the coating must be dissolved or dispersed into a solvent of some kind and this coating solution is then deposited onto the surface and spun-off to leave a uniform layer for subsequent processing stages and ultimate use.

Some technologies that depend heavily on high quality spin coated layers are: