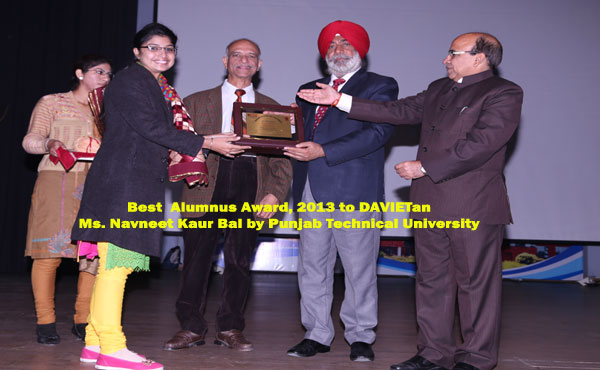 Working as lecturer in DAVIET Jalandhar

I have just completed my 1st year of MBA and I have started on with my advertising agency.I have already directed 3-4 advertisements which are running on state channels and along with that I have directed 2 Punjabi songs.

I did Masters in Network Centered Computing from University of Reading, UK. Now, I am working as System Engineer in Capex IT, UK in Health informatics field .

Working In Wipro As Engineer

Topped Pravesh (the entry exam at L&T) with 90%. Got selected for the accelerated trainnig programme

Working in BSNL as TTA and stood first in the Amritsar circle.

Pursuing MBA from Symbiosis Institute of Operations Management, Nashik. Selected for MBA in SIOM from 700 students shortlisted for admission out of 3000+. Selected for Internship in Volkswagen AG.

Presently working as a lecturer in Elec. & Comm. in DAVIET

Presently working as a lecturer in Elec. & Comm. in DAVIET

I am able to get selected in 2 core companies of mechanical ICML AND JINDAL STEELS . Currently I am working as lect. in mechanical engg. department of DAVIET.

Have been selected in
# U.S.Technologies
#Perot Systems
#Satyam
# I-flex Solutions

I am working as DESIGN ENGG. with “NIAGRA METALS Pvt. Lmt”. This company is basically export unit of R.K Group (Ludhiana) and is dealing with JCB, GUNDERSON( America) METSO( America) BHEL and DEFENCE projects of INIAN ARMY

I am working Under JK ORGANIZATION in JK PAPER LTD. AS ASSIT. ENGG.( ELECTRICAL) Handling the Maintenance of all plant. now In The Commissioning and Maintenance team Of new power plant of 30 MW.

I bieng a part of IAFL for a year i worked as a GET and now an engg. I was involved in product development cell and tool room where i worked in CAD n PRO e for designing tools, jigs and fixtures for US & UK based sheet metal electrical enclosures of different variants for which i was being appreciated & honoured.

Was part of a Cisco project . Now currently doing a project for NAVTEQ

I am working at INDOASIAN FUSEGEAR LTD placed by campus placement. My latest achievement is the approval of production of big lot of DB’S from an american company namely COOPER B-LINE for which i fabricated the samples and i was well appreciated by my organization