The Annual Freshers Party of DAVIET, Jalandhar was organized with great pomp and show at LALA CHANCHAL DAS AUDITORIUM here today. The event was a formal welcome to the first year entrants by their seniors. It provided the students with a chance to exhibit their talent in a wide variety of cultural events. Addressing the gathering, the Chief Guest of the function Sh. K.D Bhandari, Chief Parliamentary Secretary expressed great satisfaction at the fact that in a short span of time DAVIET has made tremendous achievements.

Talent Hunt-2013 was organized by the cultural department of D.A.V.I.E.T. , Jalandhar on 19-20th September, 2013 in the Institute’s Convention Hall. The first year students participated in the event with great enthusiasm. The Competition was held in various categories as follows:

Freshers Party, “Charisma 2012″ was successfully organized on September 19, 2012 night to welcome the students of first year of B.tech., MBA and MCA. The event extended late into night as students witnessed some of the most extraordinary performances by young freshers of DAVIET. There were also guest perfromances from renowned Punjabi Artist of International Fame Comedian Mr. Gurpreet Ghuggi, who regaled the audience with their helorious performance. The students mesmerised the audience with various rounds of modeling while contesting for Mr. fresher and Ms. fresher. Sh. K.D. Bhandari, Chief Parliminatary Secretary was the Chief Guest of the Charisma 2012. 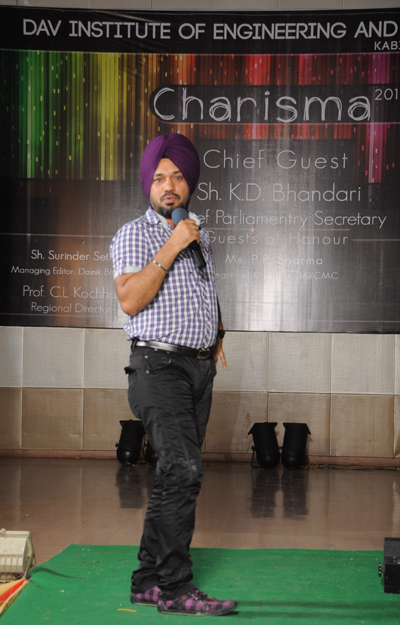